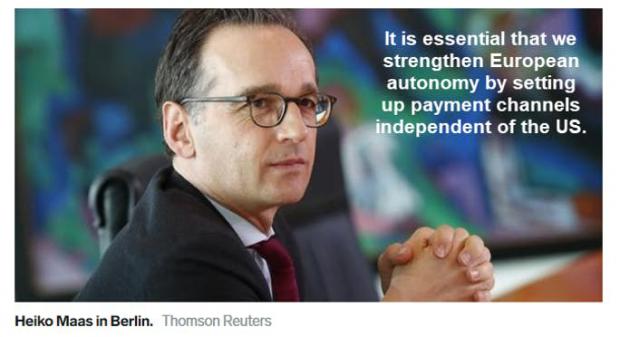 President Trump's sanctions may be the catalyst for the world to stand up and tell the US to go to hell.

In the biggest sign yet of Trump's deteriorating relationship with the most of the world, Germany's foreign minister Heiko Maas called for Global Payments System Free of US.

"As Europeans, we have clearly told the Americans that we consider phasing out the nuclear deal with Iran a mistake.," Maas said in an op-ed for Handelsblatt on Wednesday. "Meanwhile, first U.S. sanctions are back in force. In this situation, it is of strategic importance that we clearly tell Washington: we want to work together. But we will not let you act over our heads. Therefore, it was right to protect European companies from legal sanctions," he said.

"It is therefore essential that we strengthen European autonomy by setting up payment channels independent of the U.S., creating a European Monetary Fund and building an independent SWIFT system. The devil is in a thousand details," he added. "But every day that the (Iran) agreement continues to exist is better than the highly explosive crisis that otherwise looms in the Middle East."

Mass said that while history and a striving for peace had bound Europe and America, "looking back does not lead to the future. It is high time to re-evaluate our partnership - not to leave it behind, but to renew and preserve it," he said, noting that "the U.S. and Europe have drifted apart for years."

What's This All About?

The UN and EU disagree with Trump pulling out of the Iran nuclear accord.

Even Trump administration officials admit Iran was honoring terms of the deal. Pulling out of the accord is the US's right, but it was also foolish.

The worst aspect of the setup is the US unilateral

Global Debt Hits A Record $300 Trillion, Up $36 Trillion Since COVID

What Is The Goal Of Beijing's New Stock Exchange?