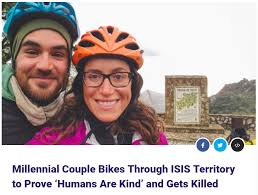 An idealistic young American couple was killed in an Islamic State-claimed terrorist attack last month while on a cycling trip around the world.

Jay Austin and Lauren Geoghegan, who were both in their late 20s, last year quit their office jobs in Washington, DC, to embark on the journey. Austin, a vegan who worked for the US Department of Housing and Urban Development, and Geoghegan, a vegetarian who worked in the Georgetown University admissions office, decided that they're were wasting their lives working.

"I've grown tired of spending the best hours of my day in front of a glowing rectangle, of coloring the best years of my life in swaths of grey and beige," Austin wrote on his blog before he quit. "I've missed too many sunsets while my back was turned. Too many thunderstorms went unwatched, too many gentle breezes unnoticed."

The couple documented their year-long journey on ?Instagram and on a ?joint blog. As The New York Times ?put it, they shared "the openheartedness they wanted to embody and the acts of kindness reciprocated by strangers."

"You read the papers and you're led to believe that the world is a big, scary place," Austin wrote.