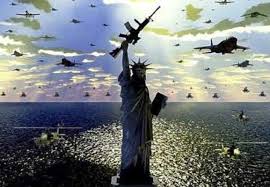 The ferocity of the Taliban offensive brought U.S. advisers along with U.S. air power, including a B-1 bomber, into the battle.

"As the casualty toll in Ghazni appeared to soar on Sunday," The Wall Street Journal reported, "hospitals were spilling over with dead bodies, corpses lay in Ghazni's streets, and gunfire and shelling were preventing relatives from reaching cemeteries to bury their dead."

In Yemen Monday, a funeral was held in the town square of Saada for 40 children massacred in an air strike on a school bus by Saudis or the UAE, using U.S.-provided planes and bombs.

"A crime by America and its allies against the children of Yemen," said a Houthi rebel leader.

Yemen is among the worst humanitarian situations in the world, and in creating that human-rights tragedy, America has played an indispensable role.

The U.S. also has 2,000 troops in Syria. Our control, with our Kurd allies, of that quadrant of Syria east of the Euphrates is almost certain to bring us into eventual conflict with a regime and army insisting that we get out of their country.