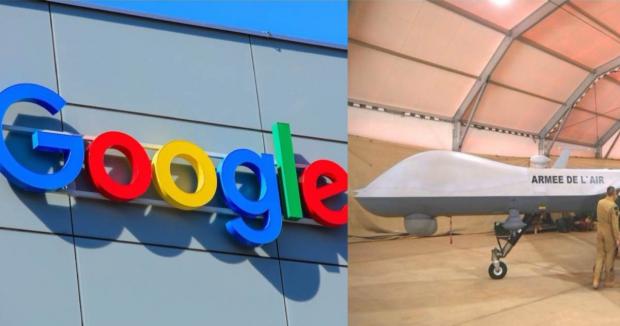 "Google should be ashamed," says Marc Thiessen, the former chief speechwriter for George WMD Bush who is a "is a resident fellow at the American Enterprise Institute (AEI) where he studies and writes about American presidential leadership and counterterrorism" and "writes about general US foreign and defense policy issues and contributes to the AEIdeas blog." He also writes a twice-weekly column for the Washington Post "on foreign and domestic policy and contributes to the PostPartisan blog," where his article referenced in my title was initially published before it was posted on the AEI website, a site I frequent because it often has good material.

Not this time. In fact, not any time the subjects of the U.S. military or U.S. foreign policy are addressed.

And why should Google be ashamed?

keeps tabs on everything you've ever searched for, on any device, including search histories you've deleted from an individual device.

knows which apps you're using, how often, when, where and with whom you're interacting when you do

keeps tabs on every single YouTube video you've ever searched for, watched and commented on.

has the ability to access your microphone without your knowledge.

has maintained an intimate relationship with the National Security Agency (NSA) for a number of years.

has every single email you've ever sent, received and deleted.

No, Google should be ashamed because:

Giving in to pressure from its workforce, Google recently announced that it is pulling out of Project Maven, a groundbreaking Pentagon program to harness artificial intelligence to sift through and interpret video imagery from drones. The move came after an uprising by 4,000 Google employees who signed a letter urging the company to cancel Project Maven and promise to never "build warfare technology."

In their letter, Google employees said that "working with the Pentagon would violate Google's longtime motto "Don't Be Evil" and "irreparably damage Google's brand."

To which the military sycophant Thiessen responded:

Excuse me? Are they saying that the U.S. military is evil? What would damage Google's brand is the impression that its workforce thinks they are too good to support the men and women of the armed forces who face real evil on distant battlefields so that Google workers can sleep safely in their Google "nap pods," enjoy free massages and take free guitar lessons.

Thiessen went on to praise the military even more. After mentioning that "Taiwan is Google's largest R & D center in Asia," and that Google has announced more large investments in Taiwan, he stated:

Who, exactly, does Google think prevents mainland China from launching a cataclysmic invasion of Taiwan? The men and women of the U.S. military. They provide the security umbrella in East Asia that allows Google to make these investments. The free riders at Google don't seem to understand that their jobs and livelihoods are built on the foundation of peace and security provided by the U.S. military.