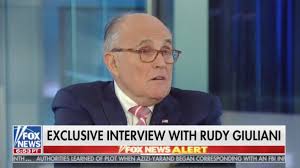 Giuliani said the "real story" is that the case isn't going to fizzle, "it's going to blow up on them," referring to the Mueller team.

"The reality is, the real story is not that this case isn't going to fizzle," he said to host Sean Hannity. "It's going to blow up on them. The real question is, what we talked about before, there's a lot more to what they did that nobody knows about yet."

"A lot more to the obstruction of justice, to the collusion, to the fake dossier," Giuliani added.

"I know some of it," Hannity revealed.

Giuliani said the only collusion involved in this case is the intel community using the Steele dossier to obtain "several fraudulent FISA wires."

"Can it get any worse? I mean, what do we need to know that this is a totally illegitimate investigation based on a report, a dossier that was paid for by Hillary Clinton and the Democrats -- probably the biggest illegality so far, the biggest collusion so far. Completely made up. Completely made up. Led to nothing except several fraudulent FISA wires," Giuliani said.

Giuliani said what is going on by the Mueller investigative team is a "different kind of Watergate," calling them corrupt "through and through."

"You know how sometimes the cover-up is worse than the crime? In this case, the investigation was much worse than the no-crime," the former NYC mayor said.

"I think it's going to lead to some very strict -- very big reforms, just like Watergate," he said. "It's a different kind of Watergate. It's on the side of the investigator."