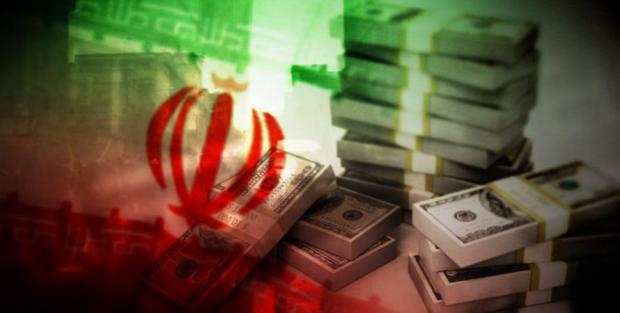 At one minute after midnight, the first round of renewed U.S. sanctions on Iran took effect, and in one of his earliest tweets since the presidential campaign, at 5:30am EDT, a sleepless Trump blasted out the "official" US position on countries that ignore his just imposed sanctions: "The Iran sanctions have officially been cast. These are the most biting sanctions ever imposed, and in November they ratchet up to yet another level" Trump tweeted.

Then, pulling a page out of a John Lennon album, Trump explained "I am asking for WORLD PEACE, nothing less!" 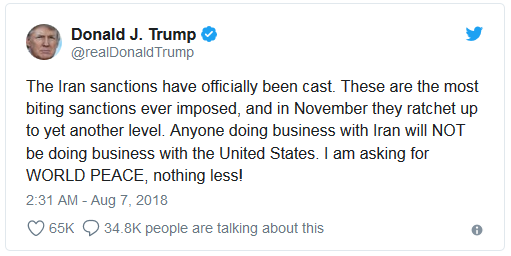 As a reminder, on Tuesday, following an executive order signed by Trump, the U.S. imposed new restrictions intended to stop the purchase of dollar banknotes by Iran, prevent the government from trading gold and other precious metals and block the nation from selling or acquiring various industrial metals. The measures, which took effect at midnight in Washington, also targeted the auto industry and banned imports of Persian carpets and pistachios to the U.S.

There were some signs Trump's aggressive policy was already working. Yesterday, Iran's President Hassan Rouhani, under rising economic and political pressure, spurned President Donald Trump's suggestion for talks with "no preconditions." However, in a televised address on Monday night, Rouhani also said Iran is open to negotiations if the U.S. is "sincere," but he added that such talks would be meaningless while his nation is being hit with sanctions. Trump and his top aides have raised the possibility of face-to-face discussions with Rouhani with "no preconditions."

"Negotiations at the same time as sanctions, what meaning does that have?" Rouhani said. "It means someone is facing a person who's a rival and enemy, if they use a knife and they stick the knife in their arm and then they say, 'Let's negotiate and let's talk.' The response to this is first all, they have to take the knife out and put the knife back in their pocket."

Rouhani also scoffed that despite his offer for talks, Trump "is someone who, without any negotiation, has withdrawn from all of his international commitments," from trade accords to the Paris climate agreement.