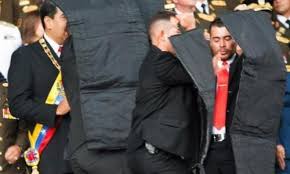 He also said that two drones carrying 1 kg each of C-4 explosive were "disoriented" by govt. signal blockers.

He added that the government has raided several Caracas hotels in search for evidence, and noted that one suspect linked to a 2017 attack on Carabobo military base, another to last year's anti-government protests.

Meanwhile speculation that this was just another false flag attack to build popular support for Maduro's crumbling regime, continues to grow.

Was it a gas cylinder explosion? An assassination plot of US-allied groups? Or possibly the unheard of "National Movement of Soldiers in T-shirts" that are now claiming responsibility?

And where are the remnants or debris parts to any drones that may have been exploded, or possibly even live iPhone footage (though iPhones have been hard to come by in socialist Venezuela over the years) of drones overhead shot by any one of what appears to have been tens of thousands attending the event?

It seems the more details that come out surrounding the apparent drone assassination attempt of Venezuelan President Nicolas Maduro on Saturday afternoon, the stranger and more ambiguous it gets in terms of exactly what happened and who is responsible.