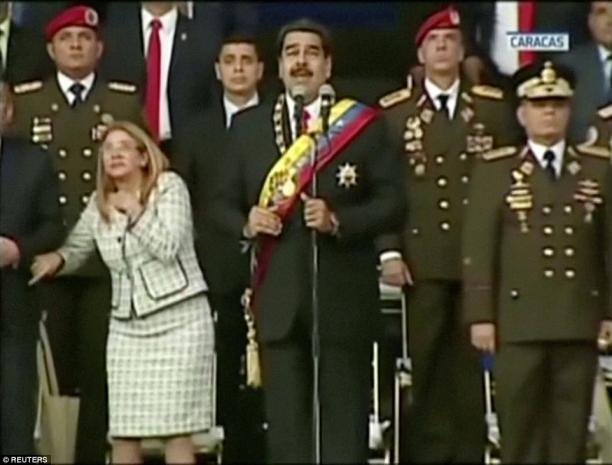 Nicolas Maduro started rounding up his political opponents after blaming them for what he called an assassination attempt on Saturday.

Maduro had been addressing a military parade in Caracas on live TV, when he suddenly halted and looked to the sky after hearing an explosion.

He and his wife Cilia Flores were swamped with aides carrying bulletproof shields but both escaped uninjured.

Maduro claimed a 'flying device' exploded before his eyes and quickly blamed his 'ultra-right' opponents, but no drones were seen on television footage, which cut out after the incident. No footage of drones emerged on social media either.

Then, three fire officials at the scene  disputed the government's version of events, claiming the attack was actually a gas tank explosion inside the Residencias Don Eduardo apartment building.

Smoke could be seen coming out of a building window at the site of the incident.

But 55-year-old Maduro promised a crackdown of his rivals as he vowed to bring down those responsible, 'no matter who falls.'

'This was an attempt to kill me,' he said in an impassioned retelling of the events, adding a number of suspects were arrested, without elaborating further on who they were.