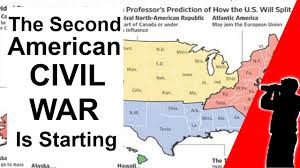 How, when, and why has the United States now arrived at the brink of a veritable civil war?

Almost every cultural and social institution — universities, the public schools, the NFL, the Oscars, the Tonys, the Grammys, late-night television, public restaurants, coffee shops, movies, TV, stand-up comedy — has been not just politicized but also weaponized.

Donald Trump's election was not so much a catalyst for the divide as a manifestation and amplification of the existing schism.

We are now nearing a point comparable to 1860, and perhaps past 1968. Left–Right factionalism is increasingly fueled by geography — always history's force multiplier of civil strife. Red and blue states ensure that locale magnifies differences that were mostly manageable during the administrations of Ford, Carter, Reagan, the Bushes, and Clinton.