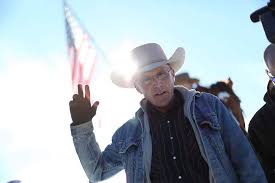 OK, let me be clear from the outset.  I have never, ever encouraged violence against another person.  I have encouraged justice when people are found guilty.  With that in mine, the latest news out of Oregon in the trial of FBI Special Agent W. Joseph Astarita, concerns the fact that "Officer 1," the unnamed Oregon State Police officer that shot LaVoy Finicum in the back on January 26, 2016, was named in court.

As we close the week, the latest bombshell to come out of Oregon in the case against Special Agent Astarita is the name of Officer #1.

As SWAT officer Bob Olson took the stand, he named the officer who fired the fatal shots into Finicum;

That information made its way onto social media, as it should have via BJ Soper and Ammon Bundy, who has been calling for the jury in the Bundy case to consider whether they would have convicted some of the defendants if the prosecution had not violated the defendants' rights and the law.

That information made its way onto social media, as it should have via BJ Soper and Ammon Bundy, who has been calling for the jury in the Bundy case to consider whether they would have convicted some of the defendants if the prosecution had not violated the defendants' rights and the law.

The name of the officer?  Casey Codding.

Now, has anyone called for this officer to be targeted for "social justice"?  Nope, not one person.

However, we know from BJ Soper:

This man has killed 3 people…" in the line of duty"

He's been promoted to captain for his "sacrifice"

He fired "justified" rounds into a moving vehicle.

He fired 2 rounds into the back of a man with his hands up.

He is the man that murdered Lavoy Finicum…

These same lies were told to people like this man, Casey Codding. Casey may be a skilled murderer that will not think for him self. He may enjoy killing the American people for his own gain, but is he really the most culpable one? Don't get me wrong this man is a killer. He has killed several people and has climbed the ranks because of it. I thought his job was to protect and serve not kill. It seems to me the only ones they protect and service are themselves. He is guilty of murder but let us not forget who amped him up, who lied to him, who manipulated him to believe that ranchers and family men are the greatest enemy to his country.

I pray for him and hope he can see what he is doing. He is a brainwashed man who has been fed lies his entire adult life about what it really is to defend freedom. He doesn't even know what freedom looks like. I pray for those who enter the police forces today; they are in a very precarious situation and they do not even know it. Those that are destroying the freedoms of this people have gotten control of the police forces and are using them to further there power and influence. These wicked men and women who have plotted, conspired and acted to overthrow this great people could not do what they are doing with out men like Casey Codding; the man who killed Lavoy Finicum and who killed two others including a teenager.

However, let us not forget Greg Bretzing head of the FBI, Governor Brown, and many, many more that would not listen to the cries of the people but instead supplied their hired killers with ammunition and then lied to them about the great threat these same people where.

How To Choose A Mascot That Won't Be Controversial In 2021