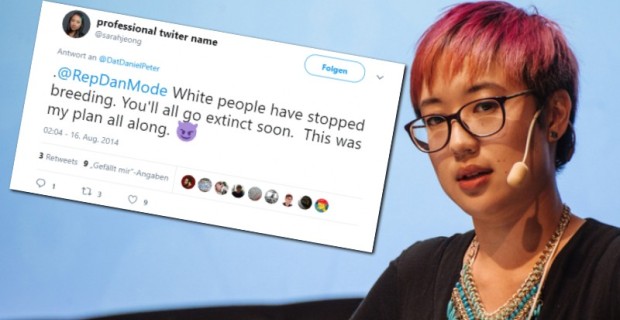 "Sarah Jeong is joining The New York Times editorial board. … [Jeong] will join us in September as our lead writer on technology. … Born in South Korea, Sarah grew up in North Carolina and California. She's both a journalist and a lawyer," the NYT announced yesterday.

The reason Jeong may have appealed to the mindset of those now running the Old Gray Lady soon became clear, after a series of tweets were unearthed in which Jeong's anti-white racism was laid bare.

In one tweet, she complained about "dumbass f**king white people marking up the internet with their opinions like dogs pissing on fire hydrants."

In another, she pondered whether white people's skin color made them "only fit to live underground like groveling goblins," adding that the whiter they were, the more "awful" they were.

Jeong also made public her bizarre interest in the claim that white people smell like dogs when it rains.

Chris Menahan over at Information Liberation has collected scores of tweets from Jeong which illustrate her obsession with hating white people, including how she gets a sick "joy" out of "being cruel to old white men" and how white people should be "canceled".