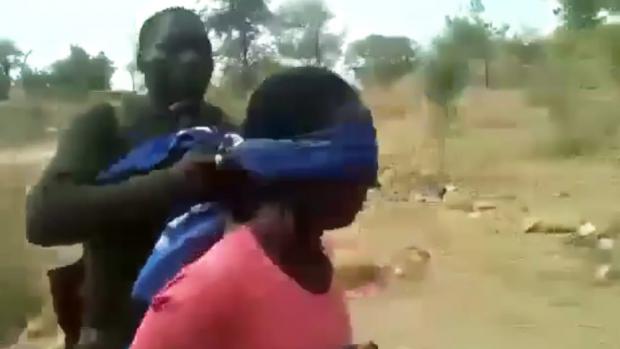 IKOM, Nigeria — In a decade that has seen countless horrific images of war, never has one shown soldiers from a military that benefits from American support carry out such a heartless and heart-rending act.

A video that went viral last month showed men identified as troops from the U.S.-backed army of Cameroon, but accompanied by other men not in uniform, lead two women down a dirt road. One woman has an infant, perhaps a year old, tied to her back in a traditional African wrap and clinging to her sides. The other woman leads a little girl by the hand who could not be older than six.

As they walk across the dusty scrubland, one soldier repeatedly slaps the face of the woman who clutches the hand of the little girl. "You are BH [referring to Boko Haram], you are going to die," he says. One of the men says what's happening was caused by the family of the women.

The four captives are walked off to the side of the road. The younger woman is blindfolded.  The other woman, seated on the ground, bows her head. "Yes, come here, little girl," one of the men says to the child, pulling her shirt up and wrapping it around her face so she cannot see. The baby on the woman's back is still looking around. And then the soldiers open fire with their assault rifles.

US Special Forces Deploying to the Congo

Boots on the Ground in South Africa's chaos

Will The New Ebola Epidemic In Africa Soon Become The Next Global Pandemic?