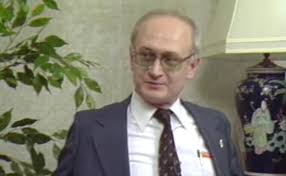 Is there really a communist plot to subvert the United States, as American politician Joseph McCarthy and many others have long warned? Ex-KGB officer and former Kremlin propagandist Yuri Bezmenov, now an American patriot, explains how there absolutely is in an eye-opening talk posted to REAL.video.

Bezmenov recalls how he was once among the many Kremlin agents whose job it was to work against American interests in cognito. He remembers being first recruited by the KGB, which influenced him towards this anti-American end by stroking his ego and placing him among other "special" recruits given similar assignments.

"One of my functions was to keep foreign guests permanently intoxicated the moment they landed at Moscow airport," Bezmenov explains in the video.

Bezmenov was later recruited in 1967 to be among 12 American "visitors" who were brought into the U.S.S.R. under the guise of covering the 50th anniversary of the October Socialist Revolution, also known as "Red October."

"From the first page to the last page, it was a package of lies," Bezmenov says.

You can watch Bezmenov's full video talk, posted to REAL.video, below:

Bezmenov: Academia is a hotbed of communist influence

Being the son of a high-ranking Soviet officer who was educated in the top elitist schools, Bezmenov was perhaps an obvious candidate for KGB recruitment. He quickly learned how to embed himself into various cultures and governments for the sole purpose of undermining them – and he apparently did it quite well.

But by the time the 1970s arrived, Bezmenov had gotten fed up with all of the lies and deception. While he remains one of the world's outstanding experts on Soviet infiltration tactics, including the crafty ways in which the Soviet regime implanted communist ideals into free societies, Bezmenov decided it was better to expose the truth.

One of the biggest channels for communist influence in America today is academia, says Bezmenov. Course curriculum at many of the most prestigious colleges and universities has been thwarted to push a communist and socialist agenda, which students upon graduation take with them into the workplace and social environment.

Demoralization of America began around 1949 when the tenets of The Frankfurt School and its social theories started take hold in academia throughout the West. Some of the leading thinkers in this realm of thought include some familiar names like Karl Marx, the father of modern-day socialism.

This communist influence throughout American society has had many decades to marinate, its damage perhaps most evident in the radical left of today that sees no problem with storming the streets and creating anarchy whenever its political candidates lose elections.

There are actually four stages of this societal breakdown, according to Bezmenov, and America is currently in stage three, also known as "crisis" mode. There's still time, he says, to reverse things – but there's really not that much time left.

Did Japan Just Warn the US of an Impending Joint Attack From China and Russia?

Russian scientists are working to produce hypoallergenic MILK after...