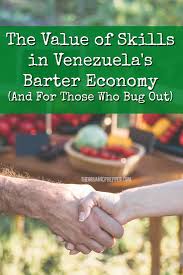 You can't overestimate the value of skills in a barter economy like the one in Venezuela. Those with skills survive, and those without are suffering terribly.

Plenty has been written about the economy since writing itself was invented. However, this basic aspect of our daily lives is not taken as seriously as it should be.  The reasons, I could not explain them; however, at a young age, I took some interest, because I noticed very quickly how it affected my wellbeing and my environment.

The more employment in a city, the less crime, generally speaking. And you could start an independent side business, and make it thrive. This is not possible any longer in Venezuela, of course. The distortions (artificially generated by the government mafia) are too strong and have been there for too long. The only possible outcome is a full reset of everything: government, police, military, and economy.

Once this is done, THEN we will proceed to rebuild our republic, and the society will come back to our former ethical background.

In recent weeks, there has been another devaluation of our currency. This is incredible for those who never lived in Venezuela. It was expected for those of us who, having done a proper research, could see exactly what is happening, and why they do what they do. Depopulation, that is the key for them to survive. For the rest of us, survival depends on something different entirely.

This said, I have received reports about bartering increasing in frequency. My dad regularly receives payments in eggs, flour, pork meat, or a chicken (raised on a small farm, not those industrial ones with poultry filled with hormones).

Not being a professional of the economy, I needed to read a lot to learn as much as I could. Thankfully I know about math and that was pretty useful. The economies have to be based in one of this functioning premises: or a service-based economy, or a production-based one. This is the big picture, and I am not an expert nor do I pretend to be one.

The special perception about this is that, under a survivalist/prepper approach, it is much more valuable if your skill set allows you to provide some sort of service, rather than some type of product. Even if this is food or some kind of medication, and you must produce plenty of it.