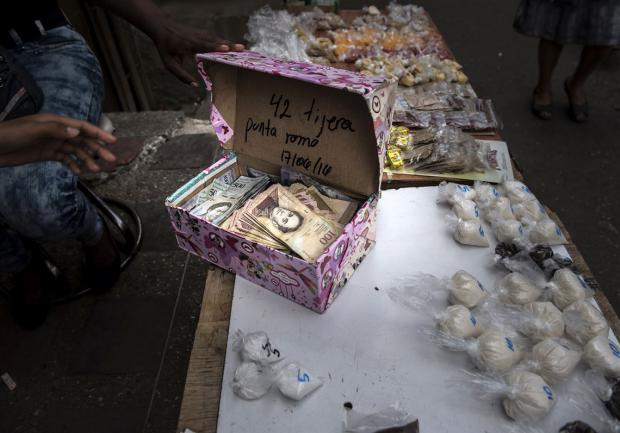 As if the government there hasn't already destroyed a once thriving economy with their force and coercion flinging the population into poverty, the continual rise in inflation will only mean people will have to live in even worse conditions; if that's possible.

As inflation rises, the standard of living goes down because your money simply doesn't go as far as it used to.  Venezuelans already live in utter poverty thanks to their enslavement by the socialist regime run by Nicolas Maduro.  But things could sadly, get much worse in the near future.  The government of Venezuela continues to print money to cover a growing budget hole, which will force the inflation rate up to about one million percent, the International Monetary Fund predicted on Monday.

According to Bloomberg, the economic crisis in the Latin American nation is comparable to that of Germany in 1923 or Zimbabwe in the late 2000s. Alejandro Werner, who is the head of the IMF's Western Hemisphere department,  said that he has forecast the economy of Venezuela to shrink 18 percent in 2018, which would be the third consecutive year of double-digit contractions.  This comes as oil production falls significantly as well. "The collapse in economic activity, hyperinflation, and increasing deterioration in the provision of public goods as well as shortages of food at subsidized prices have resulted in large migration flows, which will lead to intensifying spillover effects on neighboring countries," Werner wrote in a blog post.

1 Comments in Response to SOCIALISM: Venezuela's Inflation Rate Could Hit ONE MILLION PERCENT

But somehow democratic socialism will work every time?????? The closest places were I see that it somewhat works are small countries with highly controlled boarders. tightly controlled businesses and a very slow growth in their economy's along with high taxes on everything and everybody.