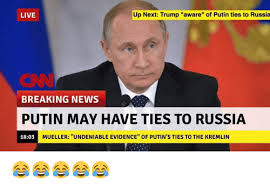 To those of us raised in the Truman era, when the Red Army was imposing its bloody Bolshevik rule on half of Europe, and NATO was needed to keep Stalin's armies from the Channel, the threat seemed infinitely more serious. And so it was.

There were real traitors in that time.

Alger Hiss, a top State Department aide, at FDR's side at Yalta, was exposed as a Stalinist spy by Congressman Richard Nixon. Harry Dexter White, No. 2 at Treasury, Laurence Duggan at State, and White House aide Lauchlin Currie were all exposed as spies. Then there was the Rosenberg spy ring that gave Stalin the secrets of the atom bomb.

Who do we have today to match Hiss and the Rosenbergs? A 29-year-old redheaded Russian Annie Oakley named Maria Butina, accused of infiltrating the National Rifle Association and the National Prayer Breakfast.