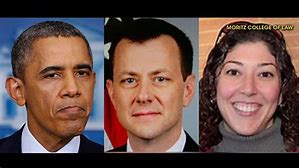 Their extraordinary texting affair on their government phones has given the FBI a black eye, laying bare a raw political bias brought into the workplace that agents are supposed to check at the door when they strap on their guns and badges.

It is no longer in dispute that they held animus for Donald Trump, who was a subject of their Russia probe, or that they openly discussed using the powers of their office to "stop" Trumpfrom becoming president. The only question is whether any official acts they took in the Russia collusion probe were driven by those sentiments.

The Justice Department's inspector general is endeavoring to answer that question.

For any American who wants an answer sooner, there are just five words, among the thousands of suggestive texts Page and Strzok exchanged, that you should read.

That passage was transmitted on May 19, 2017. "There's no big there there," Strzok texted.

The date of the text long has intrigued investigators: It is two days after Deputy Attorney General Rod Rosenstein named special counsel Robert Mueller to oversee an investigation into alleged collusion between Trump and the Russia campaign.