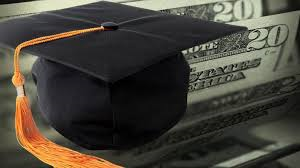 Norwich University announced Tuesday that it will become the latest school to offer this type of contract, known as an income share agreement. Norwich's program is starting out on a small scale, mainly for students who do not have access to other types of loans or those who are taking longer than the traditional eight semesters to finish their degree.

"Norwich University is committed to offering this new way to help pay for college in a way that aligns incentives and helps reduce financial barriers to degree completion," said Lauren Wobby, the school's chief financial officer and treasurer.

In contrast with traditional loans, in which students will simply pay down the principal and interest until there is nothing left, students with income share agreements pay back a percentage of their salary for a set period of time. Those touting the programs say they give colleges greater incentive to help students find high-earning jobs after graduation, because a higher salary means the school may recoup its investment in a shorter period of time.

For some students, income share agreements are seen as less risky, especially if they end up in a lower-paying job or struggle to find work after graduation. While students are unemployed or earning below a certain threshold they don't have to pay anything back.