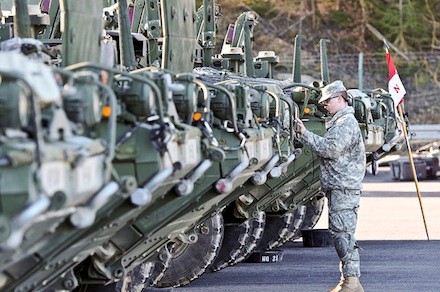 The meeting has been branded as the greatest danger to humanity, according to the Western globalist elite, because of the danger that "peace could break out between Russia and the United States."

Sometimes reality is stranger than fiction. The following so stretches credulity that sources will have to be cited and an exact quotations given to be believed.

A case in point is the following title: "Fears growing over the prospect of Trump 'peace deal' with Putin." The Times does not here fear a military escalation in Ukraine, an armed clash in Syria, a false-flag poisoning in England, or a new Cold War. The Times does not fear a nuclear apocalypse, the end of humanity, the suffering of hundreds of millions of people. No, one of the most authoritative and respected broadsheets in the world is fearful of the prospect of peace! The Times is afraid that the heads of two nuclear-armed superpowers are able to talk to each other. The Times fears that Putin and Trump will be able to come to some kind of agreement that can help avert the danger of a global catastrophe. These are the times in which we live. And this is the type of media we deal with. The problem with The Times is that it forms public opinion in the worst possible way, confusing, deceiving, and disorienting its readers. It is not by accident the world in which we live is increasingly divorced from logic and rationality.

Even if the outcome of this meeting does not see any substantial progress, the most important thing to be achieved will be the dialogue between the two leaders and the opening of negotiation channels for both sides.

In The Times article, it is assumed that Trump and Putin want to reach an agreement regarding Europe. The insinuation is that Putin is manipulating Trump in order to destabilize Europe. For years now we have been inundated with such fabrications by the media on behalf of their editors and shareholders, all part of the deep state conglomerate. Facts have in fact proven that Putin has always desired a strong and united Europe, looking to integrate Europe into the Eurasian dream. Putin and Xi Jinping would like to see a European Union more resistant to American pressure and able to gain greater independence. The combination of mass migration and sanctions against Russia and Iran, which end up hurting Europeans, opens the way for alternative parties that are not necessarily willing to Washington's marching orders.