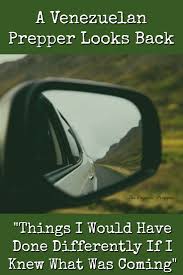 Having overcome a few personal incidents that rocked the boat these last few weeks, I want to write now about one of the most important experiences regarding the psychological aspect of prepping. Looking back as a Venezuelan prepper, there are things I would have done differently if I had fully known what was coming our way.

Enduring what we have gone through, even after having a proper approach to prepping, sort of conventional in a sense: gensets, water tanks, storage capacity, dry supplies for a few months, and other stuff, all of these are into the field of the conventional and regular prepping.

Off-road vehicles perhaps, or at least a vehicle in good enough shape to take a beating up to the retreat, radios, some food production and particular, merchandisable skills. (I lack a little bit in the field of manual arts, like pottery or painting, but maybe it is just me…I can change a tire in record time, which is an art by itself especially in a Venezuela where the roads are plagued with thugs.)

This is stuff that any person concerned about self-reliance should have covered. But next, we have to try to imagine what could be on the horizon that we have never considered.

I am not talking about prepping for every conceivable threat. That is just not possible nor practical.

What I want, is that you imagine what your action course would be just in case your worst scenario, one so bad you could not even imagine, takes place.

For those who have not read my former articles, I used to have a regular life, pretty good according to our standards in Venezuela. A good and well-paying job, medical care insurance, school at 10 minutes on foot for the kiddo. A sushi restaurant next to a pizza delivery at 5 minutes on foot, and so on. What else could you ask for?

It was all great until the apocalypse started.

How to identify this threshold is not easy for me nowadays. The more I research, the more I realize this was a planned action and conceptualized a long time ago. My generation did not have a chance to prevent it. The plan was already rolling and we were teenagers, unable to hold a gun.

The consequences would be foreseeable, for sure, for those who have lived through it already and had access to some information. Some people meeting up, perhaps some leftist candidate winning an election and slowly washing the face to the communists…the real bad guys, I mean.

How and Why to Create a Storage Unit Survival Cache

Small Space Prepping: How to Store Lots of Supplies in a Little Home or Apartment

Infojamming the Jab As We Kick Off Derrick Brozes Activation Tour

Last-Minute Hurricane Prep Round-Up: These Resources Will Help You Get Ready