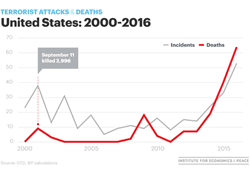 Two recent articles (here and here) have again demonstrated that the greatest "terrorist" entity on earth is not the boogeymen – Russia, China, Iran, North Korea – so often portrayed by Western presstitudes and the American government; but the United States itself!  Ever since World War II, the US has been the most militaristic, far surpassing all of the Communist and dictatorial regimes combined.

Some startling and rarely reported facts:

Currently, the US drops on someone or something a deadly explosive once every12 minutes

Funding this mass murder is a reportedly $21 trillion (!) that is unaccounted for in the Pentagon's coffers

Despite all of the "America First" bluster at the start of the Trump Administration, little has changed but, in fact, things have escalated.  While G.W. Bush in his wicked eight years dropped over 24 bombs per day and his successor upped that total to 34 bombs per day, the current Bomber-in-Chief has, in his first year in office, averaged 121 bombs per day!  For the initial year of his Presidency, 44,000 bombs were dropped on people and lands despite the fact that the US is not officially at war with a single country!

Despite these grisly statistics, which are hardly ever reported by the mainstream press, the military industrial complex and the controlled Western media outlets have propagated the lie of "precision bombing."  Precision bombing has been trumpeted to minimize the effect of US aggression to the public that only true belligerents are targeted and not innocents.

When US bombing is reported by the press, the actual casualties and property damage are never accurately given.  The most notorious example of this mendacity was the coverage of Bush II's Iraq war.  "The US and its allies ruthlessly carpet-bombed Iraq," a UN report acknowledged, "reducing it from 'a rather highly urbanized and mechanized society' to a 'pre-industrial age nation.'"

Later accounts of what actually happened showed that "only seven percent of the 88,500 tons of bombs and missiles devastating Iraq were 'precision weapons.'"

Despite these facts, US policy makers have the gall to call certain regimes "rogue" and/or "terrorist."  Do not look for any de-escalation, however, as "defense" spending for 2018 is set at $700 billion with an increase of $16 billion in the following year.  Yes, more taxes extorted from the public for the pulverization of peoples and their homes across the globe!

Even if these statistics were of common knowledge, do not look for things to change.  The majority of the American public loves its military and government and has been conditioned to overlook and accept nearly all of its military engagements and the propaganda that attempts to justify them.