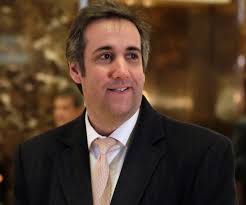 Since the FBI raided Trump attorney Michael Cohen's home, office, and hotel room earlier this year, the press has speculated that the former Trump Organization attorney would turn state's evidence against his former boss if it might help him get out from under possible bank fraud and campaign finance charges. Both Cohen and Trump had refused to comment on the rumors, until now...

In his first interview since the raid, Cohen told ABC News' George Stephanopoulos (President Bill Clinton's former press secretary) that he would put his "family and country first" if prosecutors decide to file charges against him.

But in his first in-depth interview since the FBI raided his office and homes in April, Cohen strongly signaled his willingness to cooperate with special counsel Robert Mueller and federal prosecutors in the Southern District of New York - even if that puts President Trump in jeopardy.

According to Stephanopoulos, Cohen disagreed with Trump's criticism of federal prosecutors, and said that his family is "my first priority" in response to a question about what he would do if he had to choose between protecting himself and protecting President Trump. Stephanopoulos added that Cohen "did not praise" the president during their conversation.