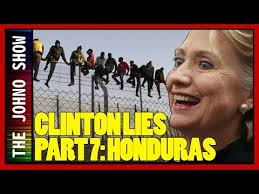 As tens of thousands gather at our southern border, roiling US politics, the question arises: why are so many of the asylum-seekers and migrants crossing the border illegally from three Central American countries in particular: El Salvador, Honduras, and Guatemala?

To begin with, it's no coincidence that these are the three "most invaded" countries south of the Rio Grande – that is, invaded by the United States and its proxies.

The Reagan years saw the apex of US intervention in the region, with fear of Communist "infiltration" motivating massive US aid to local despots and right-wing death squads throughout Central and South America: the fear of Cuban and Soviet influence drove US policy. In El Salvador, a raging civil war between rightist landowners and a leftist insurgency cost tens of thousands of lives and billions in lost income. In Guatemala, with a long history of US support to a callous and violent elite, a 36-year civil war between conservative landowners and Communist-led guerrillas devastated the country.