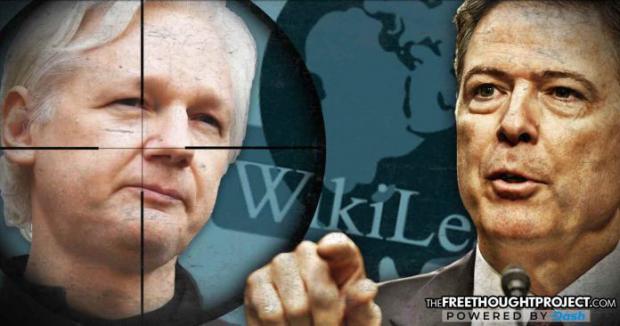 Washington, D.C. – A bombshell report that has subsequently garnered very little mainstream media attention revealed that embattled former FBI director James Comey intervened in secret negotiations between the U.S. Department of Justice and an intermediary for WikiLeaks' Julian Assange in an attempt to kill a limited immunity deal that could have potentially prevented the release of stolen CIA cyber warfare capabilities—while also shedding light on the contentious leaked DNC emails.

The secret negotiations began in January 2017, when American attorney Adam Waters was contacted by Assange's legal team—in an effort to test the waters with the new Trump administration in regards to the possibility of negotiations with Assange, who has been "arbitrarily detained" in the Ecuadorian embassy in London, under threat of extradition to the U.S. under a sealed federal grand jury indictment relating to past WikiLeaks releases of classified material.

The exclusive report by The Hill's John Solomon explained who was involved:

Some of the characters are household names, thanks to the Russia scandal: James Comey, fired FBI director. Sen. Mark Warner (D-Va.), vice chairman of the Senate Intelligence Committee. Department of Justice (DOJ) official Bruce Ohr. Julian Assange, grand master of WikiLeaks. And American attorney Adam Waldman, who has a Forrest Gump-like penchant for showing up in major cases of intrigue.

Waldman, a former Clinton Justice Department official, agreed to work pro bono in assisting Assange's team in opening the lines of communication with the proper individuals within the US law enforcement bureaucracy that would be receptive to such an overture.