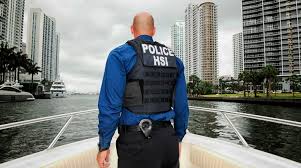 But on Wednesday, the Department of Justice announced dozens of dark web arrests thanks to a relatively novel technique. By posing as a cryptocurrency money launderer on dark web marketplaces, investigators from Immigration and Customs Enforcement's Homeland Security Investigations (HSI) were able to allegedly identify a number of people selling illegal narcotics, and open more than 90 active cases.

"Criminals who think that they are safe on the Darknet are wrong," Deputy Attorney General Rod Rosenstein said in a statement. "We can expose their networks, and we are determined to bring them to justice."

The DOJ announcement added that on Wednesday various law enforcement agencies arrested more than 35 alleged dark web vendors, including those allegedly selling cocaine, marijuana, and LSD. Investigators also seized quantities of Xanax and the high-powered opioid fentanyl. A number of the defendants are charged with weapon possession offenses.

But it's the technique used to identify these suspects that makes the operation stand out.

"Posing as a money launderer for Bitcoin seems like a great mechanism to find the dealers: There are so many paths for the dark net dealers to get drugs. There are much fewer paths for them to get cash," Nicholas Weaver, a senior researcher at the International Computer Science Institute at UC Berkeley, told Motherboard in an online chat.

At a hearing of the House of Representatives Financial Services Subcommittee on Terrorism and Illicit Finance on June 20, HSI official Greg Nevano stated that the agency's cryptocurrency seizures have already amounted to more than $25 million in the current fiscal year to date, compared to nearly $7 million in all of the 2017 fiscal year.

Greyerz - The World Is Now Entering A Terrifying Endgame