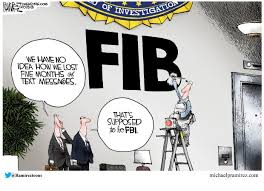 The Justice Department Inspector General is expected to release on Thursday its report on alleged FBI misconduct during the 2016 presidential campaign. Trump supporters and opponents are already pre-spinning the report to vindicate or undercut the president. Unfortunately, the report will not consider fundamental question of whether the FBI's vast power and secrecy is compatible with American democracy.

According to some Republicans, the FBI's noble history was tainted by its apparent favoritism for presidential candidate Hillary Clinton. Democrats have gyrated over the past 18 months, first blaming the FBI for Clinton's loss and then exalting the FBI (along with former FBI chief and Special Counsel Robert Mueller) as the best hope to save the nation.

In reality, the FBI has been politically weaponized for almost a century. The FBI was in the forefront of the notorious Red Scare raids of 1919 and 1920. Attorney General Mitchell Palmer reportedly hoped that arresting nearly 10,000 suspected radicals and immigrants would propel his presidential campaign. Federal Judge Anderson condemned Palmer's crackdown for creating a "spy system" that "destroys trust and confidence and propagates hate." He said, "A mob is a mob whether made up of government officials acting under instructions from the Department of Justice, or of criminals, loafers, and the vicious classes."

After the Palmer raids debacle, the FBI turned its attention to U.S. senators, "breaking into their offices and homes, intercepting their mail, and tapping their telephones," as Timothy Weiner noted in his 2012 book, "Enemies: The History of the FBI". After the FBI's political espionage was exposed, Attorney General Harlan Fiske Stone, warned in 1924, "A secret police system may become a menace to free government and free institutions because it carries with it the possibility of abuses of power which are not always quickly comprehended or understood." Stone fired the FBI chief, creating an opening for J. Edgar Hoover, who would head the FBI for the next 48 years. Hoover pledged to cease the abuses but the outrages mushroomed.

In the 1948 presidential campaign, Hoover brazenly championed Republican candidate Thomas Dewey, leaking allegations that Truman was part of a corrupt Kansas City political machine. In 1952, Hoover sought to undermine Democratic presidential candidate Adlai Stevenson by spreading rumors that he was a closet homosexual.