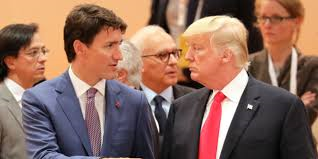 EXPLANATION of our current trade policies — they're there to argue, with a scripted list of "positions" all ready for the shouting) echo the Trudeau-Soros globalist line on "Canadian steel," I think I'll scream.

"How can you claim it somehow endangers America's 'national security' to import low-priced Canadian steel?" goes the lisping, now familiar siren song. "After all, Canada is one of our oldest, most reliable allies," blah bah blah.

OK, are you ready? Read this very slowly, if you seem to be having trouble absorbing it: There IS VIRTUALLY NO CANADIAN STEEL!