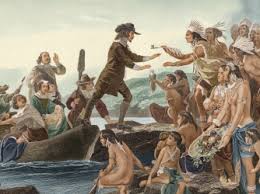 Kings never impressed him. And Roger Williams was exposed to Kings from early in his life.

As a youth, he worked for Sir Edward Coke, who was a lawyer, judge, and held other similar political posts in 17th century England. Williams accompanied him daily into the chambers of Parliament and other Councils.

Coke trailblazed many decent government policies for the time. One was that a man's home is his castle. This helped set the tone for individual rights in England, even against royal opposition. It was Ye Olde Stand Your Ground.

Williams would later take this foundation and build on it. He didn't believe that the power of Kings truly came from God. Rather, political power derives from the people. The point of government, to Williams, was to organize society for the best interests of individuals so they could pursue their own path, especially when it came to religion.

Williams' views on religion evolved over his life. By the end of it, he argued for absolute autonomy to practice whatever religion one wished. He even thought atheism should be tolerated, which was radical at that time. Though personally, he remained strongly against atheism, he realized that it was not the government's role to enforce subjective values.

At Pembroke College of Cambridge University in 1623, Williams got first-hand experience with censorship. A graduate of Pembroke was arrested after delivering a sermon arguing the king's subjects could lawfully resist a ruler who tried to kill or rape them. The student died in prison from the horrible conditions.

Gold is Money. Silver is More

The Hindenburg disaster... as you've NEVER seen it before:

DNA analysis reveals North America horses that died out 11,000 years ago were related to...

Truth Is Gaining Ground on the Lies of World War II