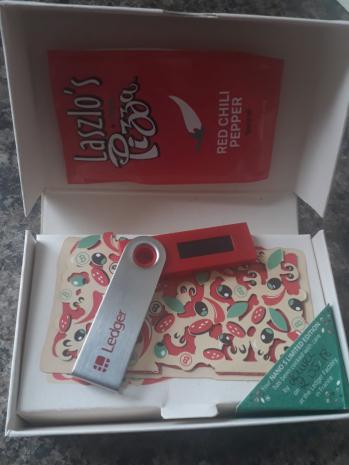 With over one million units sold, the Nano S is the world's most popular hardware wallet. A combination of first mover advantage – until recently Ledger had only really had Trezor to compete with – coupled with excellent security and usability have made the Nano S ubiquitous. This week, news.Bitcoin.com took delivery of a brand new Nano S and put it to the test.

When it comes to judging hardware wallets, there's no such thing as "best": everyone has their preferences, and provided the wallet they've chosen does the job with the minimum of fuss, it's likely to become a favorite. Despite the fact that most hardware wallets are little more than glorified USB sticks, cryptocurrency users reserve unusual affection for them. In a digital space, they're one of the few physical manifestations of the assets we own. After covering the new limited edition Nano S while writing about Pizza Day recently, I FOMO'd into buying one. The "Laszlo's Pizza" edition is just a regular Nano S in a prettier box, but symbolically it serves as a reminder of how far bitcoin's come, and of the early adopters who gave BTC the utility that led us to where we are today. Just 1,337 units of the device were released, and I took delivery of mine on Wednesday. Like all Nanos, it comes bearing Ledger's faux wax tamper-proof seal, reminiscent of the sort of seal that once adorned the king's letters. As skeuomorphisms go, this one's pretty neat.