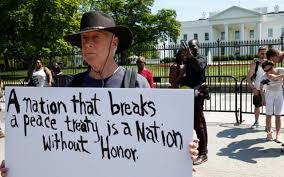 Having gone down in history with the title "In Search of Monsters to Destroy," Adams pointed out that one of the best things about the United States was that the U.S. government did not embroil itself or meddle in the affairs of other nations.

Adams issued an interesting warning. He said that if America were ever to abandon her founding principle of noninterventionism, she would become "the dictatress of the world."

One nation that can certainly attest to the reality of that phenomenon is Iran, which is currently experiencing the full force of the world's dictatress.

In a speech on Iran delivered to the conservative Heritage Foundation, Secretary of State Mike Pompeo, the CIA director who recently took control over the State Department, manifested the classic attributes of a dictator. According to the New York Times, Pompeo issued orders to Iran to not engage in nuclear enrichment programs, admit that it had military purposes for its now-dead nuclear weapons program, end its support for Hezbollah, Hamas, and Yemen's Houthis, and withdraw all its forces from Syria.