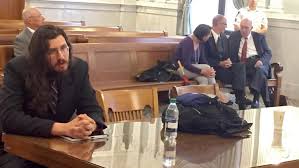 Last week we presented the story of 30-year-old Michael Rotondo of Camillus, NY, who for better or worse has come to embody all the worst stereotypical traits associated with the millennial generation, and who - representing himself in court after a "brief search on the internet" that "took minutes" - was ordered by a State Judge to move out of his parents' house after a very short legal battle with his Mom and Dad, despite Rotondo vocal plea that he was "entitled" to six more months at his parents' home rent free.

Michael's story, so typical of so many Americans his age, became national news when after years of encouraging him to seek work and become self-sufficient, his parents Mark and Christina Rotondo finally penning a Feb. 2 eviction letter which read: "Michael, after a discussion with your mother, we have decided that you must leave this house immediately. You have 14 days to vacate. You will not be allowed to return. We will take whatever actions are necessary to enforce this decision."

A short while later, terminal insult was added to ego injury when he received another letter that read: "Michael Joseph Rontodo, you are hereby evicted."

The home of Mark and Christina Rotondo is seen in this undated Google Maps, in Syracuse, N.Y.

Well, it now appears that bailouts are not only for banks but also for the occasional millennial because a restaurant chain has felt enough "pity" for the national headline grabber, it decided to offer him a job and a starting bonus.

As abc news reports, Villa Italian Kitchen thinks Michael Rotondo would "fit its recipe for success." The chain wrote in a Facebook post that "it's tough out there," particularly for millennials, and offered the young man a store-level job and training at any of its 250 locations worldwide.

Millennials Flood Into Precious Metals: Is Gold The Next TSLA?