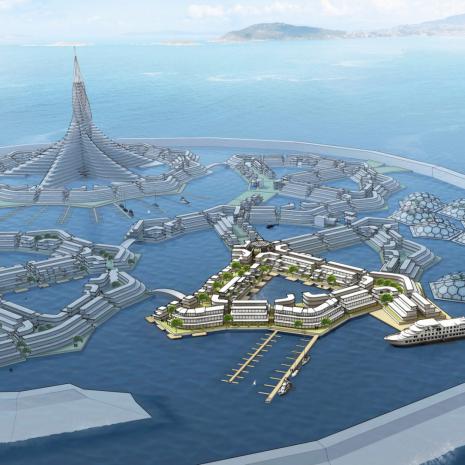 Blue Frontiers has signed a much-publicized memorandum of understanding with French Polynesia. The Floating Island Project is exactly as it reads, only it's to be an independent government complete with its own cryptocurrency. An idea long thought to be a crazy dream of libertarians is now incredibly close to realization.

"A core structural feature of current models of government is centralization," begins the pitch for an initial coin offering (ICO) pre-sale of Varyon from Blue Frontiers. "Too much centralized authority leads to inefficient bureaucracies and representatives disconnected from the people they are meant to serve. Given a suitable technological solution, governments are ripe for decentralization. That technological solution is seasteading."

The book Seasteading: How Floating Nations Will Restore the Environment, Enrich the Poor, Cure the Sick, and Liberate Humanity from Politicians (Free Press, 2017) caused an immediate media sensation. Written by Joe Quirk and Patri Friedman, it's the nonfiction account of what seems at the outset to be a sci-fi idea. Dutifully, legacy outlets treated it that way, at times dismissing seasteading as impractical, the stuff of fantasy.

"Varyon (VAR)," via the Ethereum chain (1 ETH = 14,750 VAR), ERC-20 token, "is a general purpose payment token for the exchange of goods and services in the Blue Frontiers ecosystem, other ecosystems, and between token holders. Blue Frontiers is planning to use the proceeds of the sale to expand its ecosystem and create Seazones and seasteads, and will only accept Varyon (VAR) for its products and services," Blue Frontiers claims.

Rabo: China Can Only Achieve Its Goals Under A New Bretton Woods Regime

A JPMorgan Icon Quits, And Has Some Parting Words About Cryptocurrencies

Money As the Greater Depression Deepens