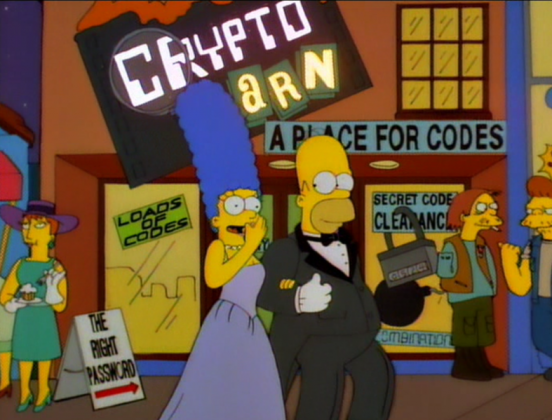 Crypto is set for yet another banner year, especially if mainstream portrayals of it are any indication. Marvel Comics' Hunt for Wolverine – Adamantium Agenda #1 and The Simpsons: Tapped Out video game are both working-in references to cryptocurrency into their respective storylines and quests in attempt to capture some of the excitement regarding money's future. Way back in 1997, The Simpsons foreshadow

The Simpsons are Crypto Cool

Mobile games have been the rage for years now, and among the so-called freemium games, The Simpsons: Tapped Out is a very popular choice within the genre. In the world of the game itself, Who Shot Mr. Burns, Part 3 (2018) is what's known as the third minor event of this year, and is the 35th minor event in the game's history. It comes directly after The Springfield Jobs 2018 Event which ends in just a few days. Crypto Cool is a limited-time quest-line, and it is the first quest in the series. Crypto Cool begins as per usual: Homer is not taking his nuclear power plant job seriously, playing games on his tablet instead of working. Players are to keep the nerdy character Martin talking about blockchain, mentioning it a zillion times, never explaining exactly what it is he's talking about. At a key point in the game, Martin admits he's only heard of of blockchain "last week. But now I act like I'm an expert on it," echoing a very real occurrence in the current ecosystem.

As If Millions Of Hollywood Celebs Suddenly Cried Out In Terror: China Bans "Effeminate Men

Amazon is going to sell its own branded TVs in the US next month after working on...

China bans men it sees as not masculine enough from TV

J.J. Abrams' Mission to Expose the Truth About UFOs