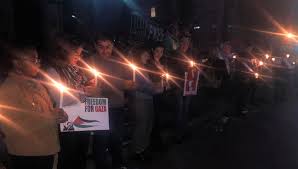 It is a state built on lies.

The people of the world have a different assessment of Israel at 70. It is a pariah state and international outlaw; a dog of war armed and unleashed by the Pentagon; a symbol of war, of racism and apartheid, and of reaction. It is a danger to all people of the region, including Israelis.

The continued struggle of the Palestinian people is most responsible for shattering the colonizer's illusions.

A dog of war unleashed by the U.S.

More than anything, Israel is an agent of war, since its formation.

Just a day after the Trump administration exited the Nuclear Accord with Iran, in a coordinated move, Israel violated the sovereign borders of Syria and bombed what it called "Iranian positions" there. The provocative nature of these attacks, and bombings days later, were to draw Syria and its allies into an escalating conflict. Israel's internal name for its strikes—"Chess."