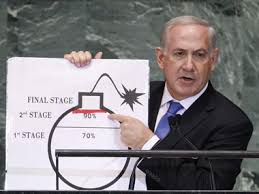 Namely, increase production of industrial grade nuclear fuel (3.5%-5.0% purity) at its enrichment plant at Natanz – which, in any event, is crawling with IAEA inspectors.

Moreover, it really doesn't matter whether Trump was play-acting in the style of Art of the Deal or that the JPAOC could be improved.

The mere threat of a military attack from the White House is madness because it arises from blatant lies that have absolutely nothing to do with US national security. Nor, for that matter, the security of any other country in the region, including Saudi Arabia and Israel.

The real purpose of the Donald's missile-rattling is nothing more than helping Bibi Netanyahu keep his coalition of right wing religious and settler parties (Likud, United Torah Judaism, Shas, Kulanu and the Jewish Home) together, thereby maintaining his slim 61-vote majority in the 120-seat Knesset.

Netanyahu's malefic political glue is the utterly false claim that Iran is an "existential threat" to Israel because it is hell-bent on getting the bomb.