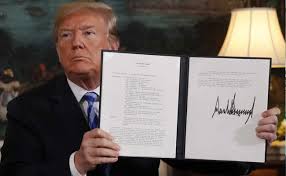 Trump has said the Iran deal is the worst of all time, and instead of staying in it he's going to impose new sanctions against Iran.

So why did Trump abandon the Iran deal? Was it truly a bad deal, or was there influence coming from Israel? And what could that influence mean for our future?

This is a Reality Check you won't get anywhere else.

"The Iran deal is defective at its core. If we do nothing, we know exactly what will happen. In just a short period of time, the world's leading state sponsor of terror, will be on the cusp of acquiring the world's most dangerous weapons."

That was President Trump on Tuesday announcing that just three years into the Joint Comprehensive Plan of Action, known as the Iran nuclear deal, the U.S. will abandon the agreement that got Iran, some say, to rein in its nuclear program.

But others say it was a terrible deal that sped up their nuclear ambitions.

So why did President Trump abandon the Iran deal? To understand that, we actually need to look back at our relationship with Iran. Here's a quick history lesson to bring you up to speed.