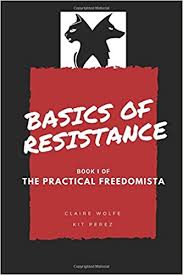 , by Claire Wolfe and Kit Perez, is exactly what the title promises – a primer on organization and operation in a (we'd like to think theoretical and future) time when the world has goosestepped past Claire's earlier take on the topic, the happy-go-lucky monkeywrenching manual Freedom Outlaw's Handbook.

What if we were past the time for lighthearted efforts to maintain our own privacy and sense of individuality, and it were really time to dig in our heels and organize for resistance? We're not quite spitting on our hands, raising the black flag and commencing to slit throats – yet – but we're thinking maybe it's time to haul down the Gadsden from the pole and go underground. What if the consequences of getting caught included getting killed or taking up a new life in pound-you-in-the-ass federal prison? What sort of information would we want then?

Well, alas, we'd want information such as that found – or at least pointed to – in this book right here, is what.

In the world that makes Basics of Resistance necessary, we're past symbolic actions more geared toward making ourselves feel good about living with Leviathan than actually taking him down a notch. We're past politics. Now we're starting to think more along the lines of how members of the Norwegian Resistance got through their days. In that regard, Basics of Resistance is not a fun book. Anyone looking for simple nostrums and instructions for quick, satisfying but empty gestures will leave disappointed. This is a book for organizers.

We're moving into stormy, unfamiliar seas here, far out from our comfort zone. And to survive and succeed, we must be willing to educate ourselves wherever instruction is to be found – even among those we might otherwise despise. Lots of people – often unsavory people – have been here before us. It would be stupid to ignore the lessons they painfully learned, just because we reject their viewpoints. "Whether or not we agree with the politics or methods of other resisters, we can learn from their successes and failures." So the reader should expect to find the book taking us to places we're rather not go. That's okay: The premise is that we're already in a place we'd like not to be. Anything less would be a waste of time.

To that end, and very characteristic of Claire's earlier work, we begin with preparing ourselves for the journey. After a lengthy and rather tentative introduction the book's first – and among its most detailed – substantive sections are all about self-evaluation. "Know Yourself." Your strengths and especially your weaknesses, your "primal needs," as a later section puts it. Are you really up to this? Are your prospective companions up to it? That question is handled in detail. A serious person would want to know the answer before proceeding. It's not the sort of thing a shallower and more juvenile work would open with. I have a whole page of notes on the opening sections, which showed me specific areas in which I need improvement.

The book leans heavily on the topic of Security. This is not a time for empty bravado – you're quick or you're done, and if you're done you're a failure. Maybe a dead failure. Knowing yourself is good: Knowing your prospective compatriots – and weeding out the useless before you venture forth – is harder and at least as important. This aspect of organization is covered in some detail.