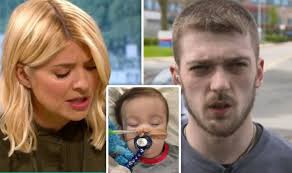 A 23-month-old baby boy named Alfie Evans has been fighting for his life in a British hospital for months. Aflie has a degenerative neurological condition that doctors say is incurable, and thus the medical staff at the hospital has basically condemned the child to die.

Alfie's parents want to do everything in their power to keep him alive. However, unfortunately, the UK government has the final say as to how the child will be treated, and a series of court rulings have ordered the hospital to take him off of life support.

Alfie's father, Thomas Evans has been attempting to appeal these rulings so the family can fly to the Vatican hospital in Rome, where they have been offered free medical care, with experimental treatments that are not offered in the UK.

Despite the fact that this will come at no cost to the UK government or the hospital, they are legally forcing the family to stay in the UK, where they will be denied medical care because the government decided that it was not worth the effort to keep the boy alive. Even worse, the hospital has not been feeding the child while he is under their care, which is now court mandated.