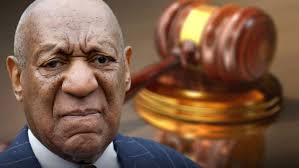 The jury of five women and seven men will decide the comedian's fate on three charges of aggravated indecent assault against Andrea Constand. Constand, a former Temple University employee, said she lost consciousness after Cosby gave her three blue pills and a sip of wine and came to with him sexually assaulting her in January 2004 at his Philadelphia-area mansion.

If convicted, Cosby could face up to 10 years for each count, though prison sentences for similar crimes tend to run concurrently in Pennsylvania.

Cosby walked out of the courtroom today with a sullen look. He thanked one bystander who told him, "God bless, Mr. Cosby."

The jury in this trial is the same as last year's in terms of gender and race. There is one black man and one black woman on the panel, with the rest of the jurors white. A year ago the jury, bused in from Allegheny County in Western Pennsylvania, spent 52 hours over five days deliberating before O'Neill declared a mistrial.

The jurors from the last trial endured 12-hour days and complained of cramped conditions in the deliberations room. One juror told ABC News last year people routinely cried and no progress was made after 30 hours. That juror said two jurors wouldn't budge on two of the assault charges, preventing them from returning a guilty verdict.

Last year's trial lasted six days. This one went for 12, with Cosby's defense team changing strategy from characterizing the Cosby-Constand relationship as romantic to portraying Constand as a gold-digger. Its lead witness, Marguerite Jackson, said Constand once told her she could fabricate a sexual assault claim against a famous person to "get that money" while they were rooming on a Temple basketball road trip. In the defense's closing argument Tuesday, lead Cosby attorney Tom Mesereau said Constand was a "pathological liar" and highlighted 12 instances he said Constand either lied to investigators or on the witness stand.

The prosecution has focused much of its case on corroborating Constand's story through the words of Cosby. The comedian spoke about his relationship with her during a deposition for a 2006 civil suit that was settled for $3.4 million. In the deposition, Cosby talked of being romantically interested in Constand from the time he met her — wanting to pursue "romance that will lead to the seeking of some kind of permission or non-permission" — and using quaaludes with other women for sex. He admitted in the deposition and in interviews with police to giving Constand three Benadryl pills and digitally penetrating her but said it was consensual.

More than 50 women have accused Cosby of sexual assault, and last year the prosecution was able to call one other accuser. For the retrial, five of those women were allowed to testify. All of them testified to either taking pills or wine from Cosby, and the prosecution told jurors it was the same routine he used against Constand.