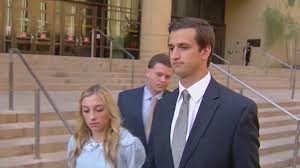 Sheriff Joe Arpaio, a massive proponent of President Donald Trump who received a federal pardon from the man, is running for the Senate seat that sitting senator Jeff Flake is abdicating this year. Jeff Flake's son is suing Arpaio while he's on the campaign trail, hoping for a second civil trial after he lost the first one last year.

Austin Flake and his ex-wife, Logan Brown, accused Arpaio's office of going too hard on them in the court of law after 21 dogs died of heat exhaustion at a kennel owned by Brown's parents. They are re-filing their malicious-prosecution case because they believe key evidence was withheld, particularly a graph produced by authorities that showed electronic usage lowering inside the kennel.

Flake is also claiming severe mental trauma due to supposed mistreatment by Arpaio's office, according to a Roll Call report. Arpaio's office recommended animal cruelty charges against Flake and Brown while prosecutors believed the case should be dismissed. Flake thinks that Arpaio pursued the case to do political damage to his father's career, which is now coming to an abrupt end after his dogged opposition to Trump backfired.

Flake even claims that the case pursued by Arpaio's office ruined his marriage. He claims he had to cycle through six different anti-depressants and suffered panic attacks during the case because it was so traumatizing to him. According to Flake's story, this strained his marriage with his co-plaintiff and caused it to dissolve.