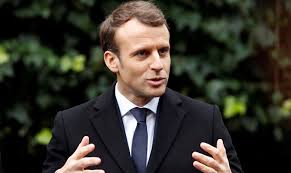 So, it looks like we now have another actor getting involved in Syria by putting boots on the ground. On March 29, French President Emmanuel Macron vowed to send troops to Manbij in support of the US-led Syrian Democratic Forces (SDF). The goal is to block Turkish advances into the region, and this move will be coordinated with the US military. According to the president, the troops will be sent "very quickly."

This announcement was made during a time of Turkish threats to drive the Kurds out of Syria's northern regions. On March 29, President Macron conducted talks with a delegation consisting of Kurdish, Arab, and Christian representatives of Syria's Kurdish territories. It was the first time Rojava officials had met with the French leader. According to him, between the warring parties. This offer to mediate has already been rejected by Turkey, which sees the SDF as a security threat.

France has always supported the US-led coalition. Officially the announced deployment to Manbij will be pursuing the goal of doing away with the Islamic State (IS), not deterring Turkey. But since the jihadists are no longer a factor with any influence in Syria, Macron's words sound like a flimsy pretext. However, sending French troops to Manbij would reinforce the American forces there and block any potential Turkish offensive. Or is France about to take over for the US in Syria, since President Trump has stated that American forces will be leaving Syria "very soon"? "Let the other people take care of it now," he added.

His statement contradicts the public position taken by other American top officials, but that's what the commander-in-chief said. And what "other people" was he talking about? Did the president mean NATO allies, such as France? Or maybe Persian Gulf states? Or both? Does this mean that new actors will appear on the landscape to further complicate things? Could be. As State Department Spokesperson Heather Nauert explained, "As a general matter, this administration looks to other countries to help out."

Earlier this month, Marines came in to reinforce the contingent of 1,000 troops stationed at the US-controlled base in Al-Tanf, which controls the intersection of the Syrian-Iraqi-Jordanian borders. How does this jibe with the plans to pull out? You never know with America's flip-flop foreign policy.

Does this mean we have a new actor in Syria? President Macron actually backed the idea of a military intervention there, under the auspices of the UN, after the Khan Sheikhoun chemical attack. It would be helpful to remember his statement that France would attack Syria if chemical weapons were used. Paris expressed its willingness to do the same thing the US has said it would do. France was the only European NATO member that threatened a strike. Paris has been highly critical of Ankara's policy in Syria. It views Operation Olive Branch as an invasion that is intended to cause problems.