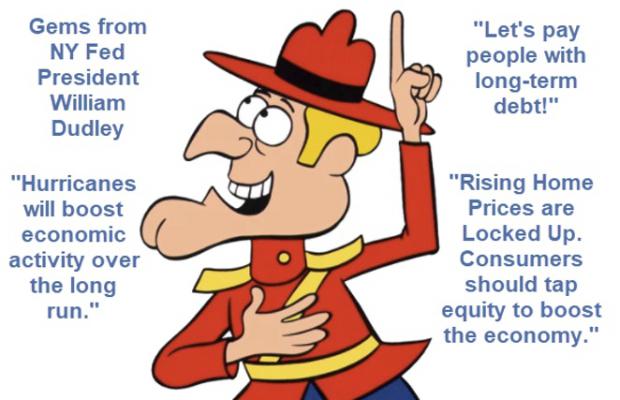 What a topsy-turvy world we live in thanks to Fed nonsense. Consider the outgoing NY Fed president's latest brainchild.

If bankers were paid more with long-term debt, it could "better align senior managers' interests with the long-term safety and soundness of the firm," he said. Such a change might need to be pushed by regulators, he said, because the banks "may be reluctant to adopt such pay structures on their own for competitive reasons."

Millennials may be shocked to discover that people used to be paid with gold.

Roosevelt ended the gold payment system during the Great Depression, illegally confiscating everyone's gold. He should have gone to prison.

Following personal confiscation, international trade deficits were settled in gold until Nixon put an end to that in 1971.

After Nixon closed the gold window, people at least got paid in cash.

People collected interest on debt in US dollars and other currencies.

The dollar is in reality nothing but debt.

NY Fed President Wants Consumers to Tap Home Equity: Didn't We Try That Before? "People are leaving the wealth generated by rising home prices locked up in their homes."

Rabo: Both The Fed And PBOC Want Inflation Surge To Stop, But What Can They Do?

Rand Paul Warns America: Time to 'Wake Up' to 'Profound Repercussions' of Biden'