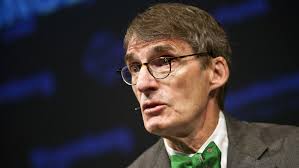 In 2011, Jim Grant chastised the Fed about replacing the Gold Standard with the PhD Standard. Our "reward" is coming up.

Here is the pertinent video clip of James Grant.

"The 2007-2009 real estate debacle is the monetary equivalent of a chain reaction on a foggy California freeway. The trouble with our monetary mandarins is they [the Fed] believe impossible things. They have persuaded themselves that the central bank can pick the interest rate that will cause the GDP to grow, payrolls to expand, and prices to levitate by just two percent a year, as they measure it. It is impossible as experience and common sense attest. Yet, they hold it to be true. ... William F. Buckley famously and persuasively said that he would rather be governed by the first 400 names in the Boston phone directory than by the faculty of Harvard. Unaccountably, this Congress has entrusted the value of the dollar that we own, that we transact to an independent committee dominated by monetary scholars. In one short generation we have moved to the PhD standard from the gold standard."

Grant is correct. The result has been a series of economic bubbles with increasing amplitudes over time.

The Alps Precious Metals Group commented on Grant in its latest monthly letter.

Beware The BIS: Macleod Warns "We're At The Top Of The Bubble"

Tennessee Will Explore The Possibility Of A State Gold Depository

Are Crypto Investors Moving Into Gold Instead? BTC vs AU What You Need To Know!

Money As the Greater Depression Deepens