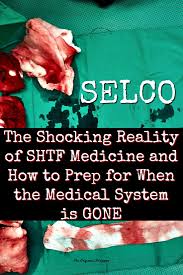 Editor's Note: Something difficult to plan for – or even wrap your brain around – is a world in which medical care is not available. Even though it's outrageously expensive here in the United States, we can still access care. We may be in debt forever, but it exists.

Since there were no hospitals, how did you treat people who were ill?

Hospitals, health centers, EMS, and everything similar was gone. The most advanced medical help that you could find in the hardest period was more or less primitive medical care that some military units had, such as medics and low-level trauma care. But this was not available to common folks.

People with medical knowledge became very important because of this fact, but even the most skilled people were often completely useless because all of the other help that the system offers you is simply non-existent.

One of my old colleagues told me story that could point out some things.

His friend called him to help him with his father, who had fallen from the roof. The man climbed on the roof to repair broken tiles, and he was there in the middle of the night (which was the safest way). He fell down, and his sons found him unconscious. They brought him in the house and called my ex-colleague, a nurse, for help.

When he arrived, he checked the old man, then called his sons in other room. He explained to them that their father was going to die very soon because most probably he had internal bleeding.

The sons were mad at him and they started to threaten him, asking him that he help the old man in any possible way.

An Arms Race in America: Gun Buying Spiked During the Pandemic. It's Still Up.