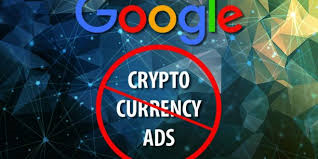 Google searches and bitcoin wallet growth continue to slow in 2018, which is all you need to know about the near term direction of the asset. But while Google's move may slow future adoption rates, plenty of other banned items (drugs, hacking software, counterfeit goods, etc.) still manage to flourish. An imperfect set of comps, to be sure, but still relevant to the discussion.

There are only 4 things Google doesn't allow you to advertise on its search engine platform:

Anything that enables dishonest behavior, such as hacking software, services to artificially inflate web or ad traffic, fake documents or academic cheating.

As of June of this year, you can add one more: anything about cryptocurrencies like bitcoin. The prohibition is actually quite broad: "Cryptocurrencies and related content (including but not limited to initial coin offerings, cryptocurrency exchanges, cryptocurrency wallets, and cryptocurrency trading advice)." Frankly it is hard to blame Google, or Facebook (which put a similar ban into place recently), for the move given the level of fraud and deception in the space. The phrase "Goat rodeo" comes to mind except goats are, at least, cute.

Bitcoin's price has been hit on the news, and for good reason: its value correlates well with the growth in the number of wallets that store the crypto online. Less advertising for bitcoin-related services may slow new wallet growth, which has already declined from its peak last year. A few numbers: