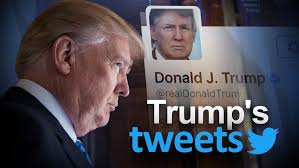 Trump took a swing at Democrats yesterday - "It's March 5th and the Democrats are nowhere to be found on DACA. Gave them 6 months, they just don't care. Where are they? We are ready to make a deal!" and followed through today by claiming "Total inaction on DACA by Dems. Where are you? A deal can be made!"

Trump then noted "Federal Judge in Maryland has just ruled that 'President Trump has the right to end DACA'. President Obama had 8 years to fix this problem, and didn't. I am waiting for the Dems, they are running for the hills!"

Then the president turned his attention to the fake-news-publishing-media, rejecting their narrative of "chaos" in the White House (but warning of more exits to come)...

This seems to be a thinly-veiled allusion to the ongoing trade debate, which various media sources have suggested has exposed ideological divisions within the White House. It also suggests that Trump may still be open to compromise, or to changing his mind, as the NY Times reported.