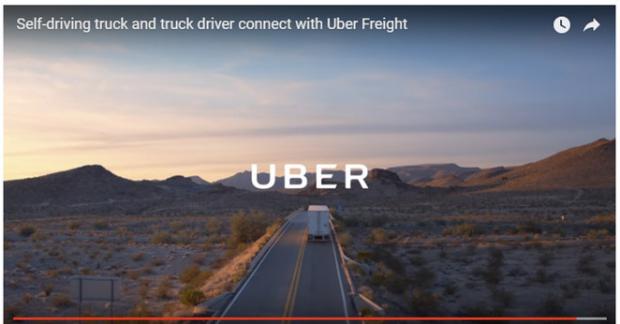 The hub-to-hub self-driving truck model is no longer a theory. For now, there's a backup driver. Two years from now?

"Uber's big push to dominate the trucking industry took a leap forward today with the announcement that the ride-hailing giant is now operating its fleet of self-driving trucks on its freight-hauling app. The shipments are taking place in Arizona, where the ride-hailing giant is also testing out its robot taxis. Uber said it is using a transfer hub model, in which the trucks drive autonomously on the highway and human drivers take over for the last miles.

Uber isn't the only company using self-driving trucks to haul cargo. Embark has been shipping refrigerators between Southern California and Texas since late 2017. The startup just completed a coast-to-coast trip from LA to Jacksonville, Florida, driving 2,400 miles autonomously. Nor is Uber the only Silicon Valley company looking to grab a piece of the brokerage market. Seattle-based truck technology company Convoy has raised $62 million for its app that matches trucking companies with shippers that need to move freight.

As a standalone business, Uber's trucking venture still faces significant headwinds. There are significant costs associated with owning and managing a fleet of trucks, not to mention outfitting each with an expensive array of off-the-shelf cameras and sensors. If it decides it would rather be a supplier, though, Uber will have to forge relationships with fleet operators who will be looking for significant savings before committing to any deal with a novice in the trucking world like Uber."