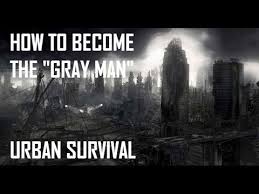 In our interviews with Selco, he has frequently mentioned the Gray Man principle. This is something that people in the preparedness community mention a lot, but many don't fully understand it. In this week's interview, Selco explains how – and why – we should embrace being the Gray Man, even before the SHTF. ~ Daisy

In your articles, you frequently mention being the Gray Man. What exactly does this mean?

It is a simple concept that comes to be very important when SHTF, and it is often completely opposite of how a lot of preppers are planning to look or act.

In the shortest definition, it is staying uninteresting or simply looking and acting like most of the people around you in a particular moment.

It can be used in a lot of situations when SHTF, during prolonged periods of time, or during short-term events.

How can you use the Gray Man concept for your home so it is less likely to be targeted?

It depends on the situation, but in case of a serious collapse in urban settings "home invasions" (especially in first period) happens based on opportunity and what can be achieved from that invasion.

In other words, yes, if your home is less protected then it is easier to get inside, but in terms of SHTF the more your home looks like a place with valuable things inside, the higher chances are for being attacked.

Remember it is a time without (at least without proper working) law and police force. That means there are no police coming to help after a few shots. There is only you and the attacker.

Having a home with visible cameras, expensive equipment, attack dogs, alarms and similar (especially in a neighborhood where that is not usual) clearly makes you different and gives attackers the idea that there are valuable things inside.

Having all that equipment in times when there is law and order makes sense because police and help are only a couple of minutes away.

When the SHTF in Bosnia, the first houses that were robbed were known rich guys' houses. It didn't matter that they were defended and had steel bars.