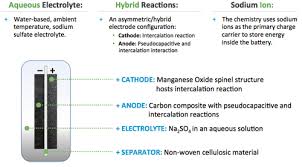 We're so used to having our everyday devices powered by lithium-ion batteries that sometimes it's hard to imagine using anything else. But there are plenty of teams working on alternatives like lithium-air, sodium-ion, lithium-metal and aluminum-ion designs that may help solve some of the drawbacks of lithium-ion batteries. The latest, an aqueous hybrid capacitor, is stable, safe and boasts high energy and power densities, recharging in as little as 20 seconds.

The new creation, out of the Korean Advanced Institute of Science and Technology (KAIST), is made with a liquid electrolyte sandwiched between a specially-designed anode and cathode. The anode is made with polymer chain materials based on graphene, which gives it a high surface area, allowing it to store more energy. The cathode material was made up of nickel oxide nanoparticles embedded on graphene.

Thanks to these materials arranged in these structures, the new device had much higher energy density and faster energy exchange than other aqueous batteries. It was far more stable with minimal energy loss, maintaining its capacity at close to 100 percent over 100,000 redox cycles.

The new device also has a power density about 100 times higher than similar designs, allowing it to be charged in 20 to 30 seconds using low-power systems like a conventional USB charger. In tests, the team hooked two of the batteries up to a flexible photovoltaic cell, and was able to power an LED, while the whole kit was worn like a sleeve.