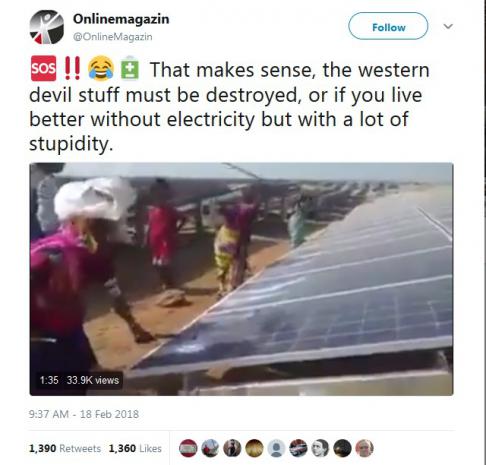 Recently on the social-media circuits, a short video of individuals smashing solar panels has been shared with much eagerness. The narrative quoted above the video has ranged from a condemnation of Islam, the third world, low IQ demographics, and Africa in general. The video comes from India. It is a short clip depicting indignant Indians vandalizing the property of a company that had not paid them in some time. Despite information about the event being quickly found, the true story behind the footage does not matter. The intention is to bolster a world view based upon cultural supremacy, despite any smug and glaring ignorance displayed in doing so. 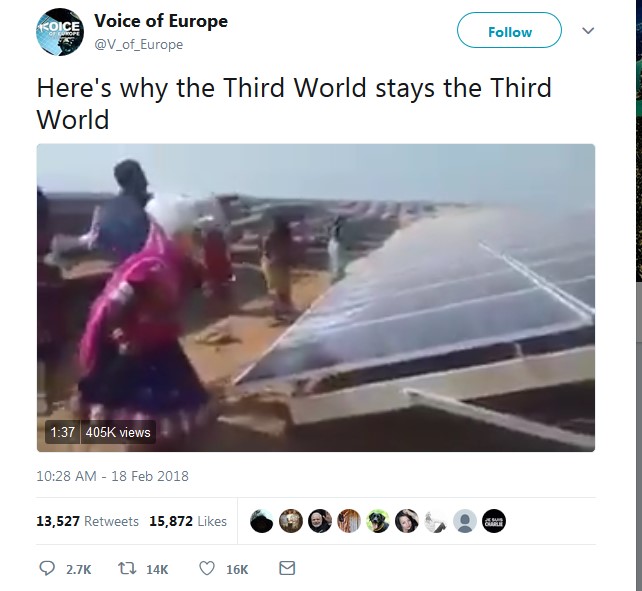 This is a microcosm of wider elements, just one clip that has been hijacked by supremacists and racialists to exhibit just how backwards and demented the "lesser humans" are: a modern day human zoo, showcasing the barbarity of the uncivilized, the non Western. It is nothing new, and it is to be expected from certain hate groups and divisive elements that seek to blame others for their own woes or for the peril of a wider, more perfect society. But it is becoming more widespread, especially among many who claim to hold up the flames of individualism and liberty.

Libertarianism and its many related forms are supposed to be based upon a non-aggression principle, many of which — whether left, right, or simply principled — are supposedly wary of hierarchies, collectives, and most of all coercion. This is a common hallmark of many of those adhering to such philosophies, with deviations and scale relating to property and the role of government, if any, in supporting individual rights being the most contentious aspects. Yet many on social media who commented and shared this video along with its progressive narrative claimed to be libertarians. Some even adopted the handles of Rothbard and used words like "liberty" in their profiles. These individuals are to many the face of a wider philosophy; a philosophy that tends to confuse its detractors as much as its supposed followers.

No ideology is perfect. They are all made up of imperfect human beings. Yet individualism and the acceptance that we are all different as individuals seems obvious. It is apparent in our every day interactions, and yet those who claim to understand this and to embrace it fall back to a vile need to relegate so many others into a clunky defined collective. This is nothing new. It is, in fact, crucial to most movements, to blame and demonize the outsider to suggest an impeccable supremacy of ones own pure identity only to have it defiled by the outsider and their toxic influences. The liberty movement often irritates those outside its fold because it is meant to be above this; its righteousness is in its nuanced values for circumstance and individuals.